By ECO Digital Learning | Gender, Technology in education | No Comments 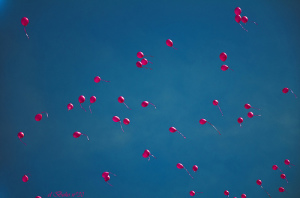 Women tend to experience barriers when it comes to accessing technological environments and in particular Internet. In addition, we must add the difficulty in producing content, its visibility as a female identity and advanced use of the Internet. The first gap is about usage and equipment and the second one is related to literacy and the digital culture. Both hinder equal opportunities. Given this scenario, the MOOC philosophy (universal, accessible, open, free) represents a learning potential beyond the multidisciplinary education. 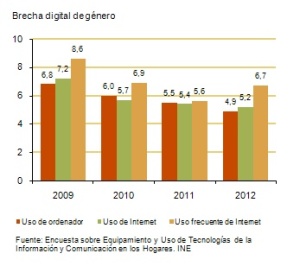 Source: Survey on Equipment and Use of Information Technologies and Communication in Households. INE.

The national Institute of Statistic in Spain (INE) assures that in 2013 that the digital gender gap has been reduced in 2012 in the main indicators analyzed (using computer and Internet usage) over the previous year, except for the frequent use of the Internet, which has increased at one point. The highest value corresponds to frequent Internet use (6.7 points), followed by the use of the Internet (5.2 points), and useage of the computer in general (4.9 points). Always with regards to these three indicators, gap values have declined over the last years.
Nevertheless, gender gaps are still existent. The first ICT (quantitative) gap we identify is the difficulty of access to the technology itself. The second difficulty is a gap related to usage of ICT, and has a qualitative nature and thirdly a sifnificant is the limited use of more advanced ICT services, such as mobile Internet. This is where the percentage of usage drops significantly.

Beyond equipment and Internet access to include, as indicated by Castells and Cecilia Brown, there are a set of factors such as educational level, personal training, access to employment, culture and social and family background. “A second cause of social division which is much more important than connectivity in terms of technology, is the educational and cultural ability to use the Internet.” ECO foresees a relevant role for ECO MOOCs in this respect.

It is a complex problem that requires solutions and coordinated responses between different fields, disciplines, individuals and social institutions. ECO plans to embed findings from the following proposals from the source Mujeres en Red, as a roadmap for equal opportunities in relation to MOOCs: