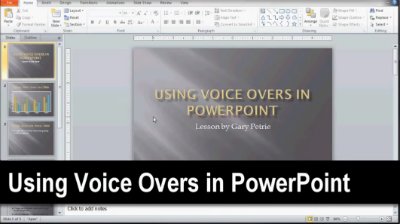 Considering that video is the main method of content delivery in MOOCs, we are going to provide you an overview of presentation slides with voice-over videos.

This article forms integral part of the on line MOOC course communication, created by The University of Manchester. It will end the 4th of December. You can still enrol!

Adding voice over to existing PowerPoint slides can be a great way to turn slides you’ve used for years into stand-alone flipped content.

The basic functions of PowerPoint are pretty easy to use, but it has many features that can really take your presentation to a new level. The ability to supplement a presentation with voice-over or other audio is one such function.

Adding your voice to PowerPoint slides is a pretty easy process, and it can turn a presentation from a plain set of slides into a self-contained instructional asset that stands alone and can be used by students to self-teach. This can be a great way to test the waters with flipped content delivery.

The basic steps are as follows:

Note that if want to record over a section you are not happy with, just record over it and your new content will replace your old content (as long as you save it). Once you are done recording a part, hit the “Escape” key and PowerPoint will ask you if you want to save the timings on the slides. Always choose yes. Save your PowerPoint presentation each time you complete any section of narration.

Once you have completed part or all of your narration, play your presentation to watch and hear it. You will probably have to experiment with these steps and the overall process to get through your first voiced-over presentation, but once you’ve done it once, you will know what it takes to repeat the process.

You can save it in a few formats. You may want to try different approaches depending on where you want to deliver it. Depending on the PowerPoint, you can export your enhanced slide deck in WMA format so it plays as a video.

You can still enrol! We can’t wait to see what you filmed after completed “Videos for teaching, learning, and communication” – Team UoMan. 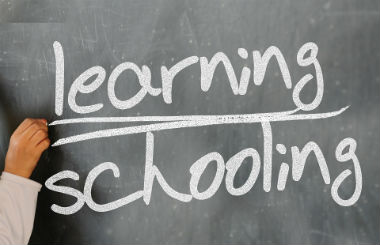 Considering that video is the main method of content delivery in MOOCs, we are going to provide you an overview of one of the most frequently requested type of videos: Khan-Style Tablet Capture.

This article forms integral part of the on line MOOC course Videos for teaching, learning and communication, created by The University of Manchester. It will end the 4th of December.

Salman Amin “Sal” Khan is an American educator who founded the Khan Academy, a free on-line education platform and an organization with which he has produced over 6,500 video lessons teaching a wide spectrum of academic subjects, mainly focusing on mathematics and sciences.

Khan was motivated even at a young age to help other people learn.In late 2003, Khan began tutoring his cousin, Nadia, in mathematics over the internet using Yahoo!’s Doodle notepad. When other relatives and friends sought his tutoring, he moved his tutorials to YouTube where he created an account on November 16, 2006.

The popularity of his educational videos on the video-sharing website prompted Khan to quit his job as a financial analyst in late 2009.

He moved his focus to developing his YouTube channel, Khan Academy, full-time with the aid of close friend Josh Gefner.
Khan consequently received sponsorship from Ann Doerr, the wife of John Doerr.
His videos received worldwide interest from both students and non-students, with more than 458 million views in the first number of years.

Khan outlined his mission as to “accelerate learning for students of all ages. With this in mind, we want to share our content with whoever may find it useful”.  Khan plans to extend the “free school” to cover topics such as English. Khan’s videos are also used to educate rural areas of Africa and Asia.

Khan published a book about Khan Academy and education goals titled The One World Schoolhouse: Education Re imagined.

Khan Academy, initially a tool for students, added the Coach feature in 2012, promoting the connection of teachers with students through videos and monitor tools.

As an educator, this handy guide to creating your own lectures in Khan Academy style will hep you:

If you use a Mac, you can use the following programs:

How can you improve your handwriting?

If you want to work with layers, and / or  import pictures, you could check some video tutorial.

We can’t wait to see what you filmed after completed “Videos for teaching, learning, and communication”. You can still enrol! – Team UoMan.

Note: Article idea and some texts are taken from: